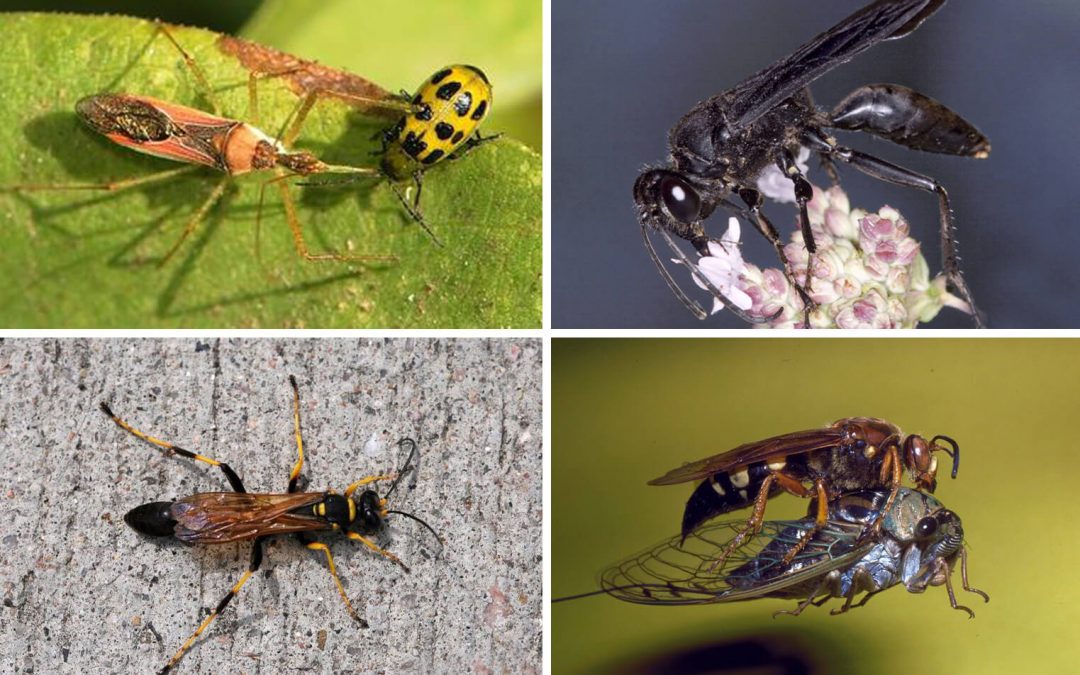 When you think of bugs on your crops, you probably think about those pesky little insects that feast on your produce and crops. This is understandable since they can reduce yields, blemish produce, and transmit diseases. But, what about the other 95% of insects out there that don’t cause trouble? You might be surprised to find out how much they can actually help you!

The conservation of beneficial insects on his farm is a critical part of Bryan Jorgensen’s management plan, an agronomist for his family’s operation, Jorgensen Land and Cattle near Ideal, South Dakota.

“Insects are a primary part of the biome; it wouldn’t function without insects,” he says. “Their activity contributes to the building of soil organic matter, for instance. Beneficial predatory insects eat pest insects. Some insects are pollinators. Others are herbivores that regulate weed populations by eating weed seeds.”

Farm profitability is enhanced by the cooperative efforts of beneficial insects, he says. The economic benefits spin from multiple services performed by helpful insects. Boosting yields is one benefit of insect pollination of flowering crops. Another benefit, insecticides and fungicides may be reduced by beneficial insects consuming pests.

An uncertain science is assessing the extent of beneficial insect populations in fields and whether they are growing. Jorgensen evaluates insect activity by examining the soil itself and its ability to absorb moisture.

“If you have a healthy soil system — with residue on the surface — you’re going to have tons of insects, and if you look beneath the residue, you’ll see them,” he says.

Jorgensen remembers a time when his family’s farming system was an unhealthy one. “I started farming in the mid-1980s, and at the time we used lots of tillage,” he says. “We had summer fallow, and we kept it tilled black. There was little opportunity for insects to thrive, and certainly the tillage prevented any chance for insects to build micropores and macropores in the soil.”

“We practice the five principles of soil health, which are all important to maintaining a healthy soil system, including a healthy population of insects,” says Jorgensen. “We keep the soil surface covered with residue. We disturb the soil as little as possible, and we try to keep living roots in the soil for as long as possible. Living roots create a host environment for a living biology.

“We also try to mimic nature by growing a diverse population of crops, and we integrate livestock grazing into the system,” he says. “Through their manure and urine, grazing cattle, sheep, or goats spread nutrients from the crop residues back onto the soil surface. The insects then move these nutrients back into the soil system.”

“On some of our poorer ground we establish tame grasses for 10 to 15 years to build soil health,” says Jorgensen. They feed their livestock most of the crops they grow.

They grow a multi-species cover crop behind winter wheat. “We harvest the wheat in mid-July, and behind that we plant a cover crop mix including eight to 12 species of both warm-season and cool-season plants,” he says. “We graze cattle on the cover crops in November, December, and January.”

By grazing cover crops and mechanically harvesting crops, they monitor the amount of residue being removed from fields. “We have to replace that residue with some other kind of residue or nutrient, otherwise the system will go backward and organic matter will decline,” says Jorgensen.

Since soybeans leave little residue after harvest, the Jorgensen farm typically plants winter wheat, a crop with high residue, after soybeans, if the weather allows.

“If we don’t plant winter wheat behind the soybeans, we’ll plant oats or spring wheat on that field in the spring,” he says.

They have found that grazing cattle on cover crops is the most effective way to maintain surface residue and build soil organic matter. “Across the farm in 2021, the average organic matter content of our soil was 4.3%,” he says. “Some fields tested as high as 8.5%. Those were fields that had a history of very little removal of crop residue and a lot of cattle activity,” he says.

The organic matter in their soil was typically around 1% before they adopted regenerative management.

As an insect researcher, Jonathan Lundgren has dedicated his life to exploring the role of insects in agricultural production systems. After working as a research entomologist for the USDA-Agricultural Research Service, he founded Blue Dasher Farm, Estelline, South Dakota, as a research and demonstration farm in regenerative agriculture.

“There are hundreds of species of insects, and many of them are extremely important in reducing a farmer’s dependence on insecticides,” he says. “Lady beetles, lacewings, ants — those are just a few common examples of beneficial insects.

”Research data suggests that diversity of insect populations on farms correlates with profitability, says Lundgren. “We know that farms that have more insect life have fewer pests and don’t have to spend much money on inputs; thus, they tend to be profitable,” he says.

Insect populations are best built by eliminating tillage and agrochemicals, and by increasing farm biological diversity. “Grow lots and lots of plants,” he advises farmers. “Never leave soil bare, and get animals out on the landscape to regulate those plants.

According to Lundgren’s research, farmers who adopt such regenerative practices can benefit as early as one year from the services of beneficial insects that prey on crop pests. One study shows that predation on pest caterpillars doubled in the first year of the transition and nearly tripled in the second year.

”To compensate for the damage done to insect populations by the application of herbicides to crops, he suggests continued seeding of diverse plants in the field to keep living roots in the ground. “You might also leave strips in the field that are unsprayed, to create ‘islands’ where the insects can live.

”The most important way to ensure the diversity of life on a farm — including insects — is to become intimately familiar with your soil and plants and the life that attends them.

“Every day, walk out into a field and see something — some form of life — that you’ve never seen before,” says Lundgren. “If you can do that, you’re on the right path to building biological diversity on your farm.”

Beneficial insects have increased in numbers as a result of regenerative management practices. These insects help maintain healthy crops and soil systems. Jorgensen does everything he can to protect their well-being.

“I don’t use any insecticides, with the exception of controlling alfalfa weevils every five or six years,” he says. “I also use no fungicides. In a healthy system, plants can typically defend themselves against viral infections.

“Unfortunately, many of us have been taught that insects are bad, and we have to spray them,” says Jorgensen. “In truth, most insects are beneficial. It’s only a handful that cause problems. Healthy soil and cropping systems need insects to thrive.”